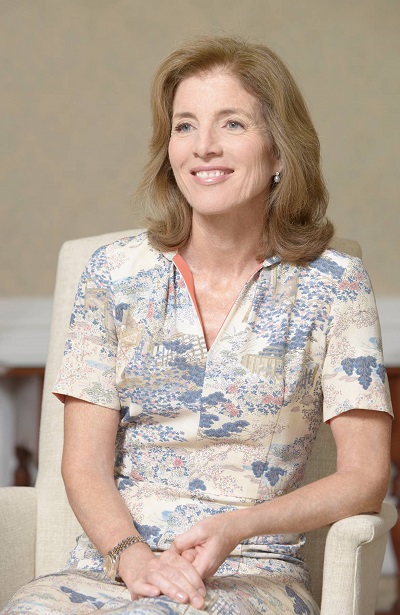 Ms. Caroline Kennedy (b. November 27, 1957)
Ms. Kennedy served as the first female U.S. Ambassador to Japan from November 2013 to January 2017. As Ambassador, Kennedy supported economic empowerment of women and worked to increase student exchange between the United States and Japan. She strengthened cultural ties between countries through the International Poetry Exchange Project (IPEP), a program she co-founded that brings together high school students from New York City, Japan, South Korea, and the Philippines with the goal of promoting cross-cultural dialogue. She oversaw the commemoration of the 70th anniversary of World War II, including the historic visits of President Obama to Hiroshima and Prime Minister Abe to Pearl Harbor, and was instrumental in realizing the return of the Northern Training Area to Japan.
Ms. Kennedy is the author/editor of eleven books on such subjects as law, civics, and poetry. From 2002 to 2013, she served as Vice Chairwoman of The Fund for Public Schools in New York City, helping to create the first K-12 arts curriculum funded by the private sector. She also served on the Board of Trustees of the John F. Kennedy Center for the Performing Arts. Ms. Kennedy is currently the Honorary President of the John F. Kennedy Library Foundation, a Director of the United States-Japan Foundation and a Trustee of the Asia Society. She holds a BA in Fine Arts from Harvard University and a JD from Columbia Law School.

International Advisors
In addition to Ms. Kennedy, there are four other International Advisors: Mr. Lamberto Dini (former Italian Prime Minister); Lord Patten of Barnes (Christopher Patten, Chancellor of the University of Oxford); Prof. Klaus-Dieter Lehmann (President of the Goethe-Institut) and Mr. Jean-Pierre Raffarin (former French Prime Minster).  Each International Advisor recommends candidates in five categories, and make a press announcement of the recipients in each country.